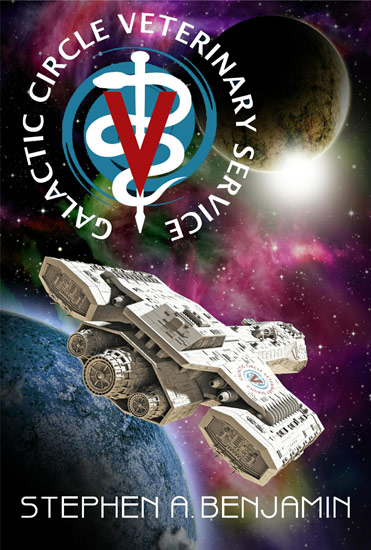 His family threatened by his world’s tyrannical theocracy, Dr. Cy Berger is forced to run an interstellar veterinary service as cover for espionage in advance of a galactic invasion. Accompanied by a sadistic and xenophobic government spy, a veterinary assistant who is a covert member of the underground resistance, and an unusually perceptive Artificial Intelligence, he offers medical services to and makes allies of the alien life-forms he meets. Treating werewolves for mange only scratches the surface of his adventures. Always, he seeks a way to free his parents and his world from oppression.

I just did it again, shot off my mouth while surrounded by the tavern’s myriad of flapping ears. Too much ale was no excuse.

The behemoth in front of me dominated my vision. I underestimated him because of his worn laborer’s clothing, and he demolished my self-composure when he said, “And you believe your experience supersedes that of the Torah?”

“You’re twisting my words,” I said in loud debate, hoping the volume of my voice would support my big mouth. “The Old Testament is not meant to be taken literally. More than four thousand years of experience has changed the context of what was written.”

“God gave Moses the Torah.” Goliath’s laugh boomed across the room. “I was not aware that the word of God had need for a context.”

A chorus of patrons echoed his mocking laugh. Even so, I sensed many of them supported my views but would not voice that support—for good reason. They had seen the three rebbes watching our conversation. I had not.

The rebbes rose from their table and headed straight for me. My heart jumped as they glared at me from beneath the brims of their traditional black flat-brimmed fedoras.

A hush came over the crowd, and the commentator of a free-fall soccer match on the giant plasma screen thundered against the silence. The overhead bioluminescent lights felt like heat lamps. A trickle of sweat ran down the back of my neck. People rose and scuttled for the exit as if afraid the black-coated enforcers of religious purity might target them next.

The rebbe closest to me had a scar that ran from the corner of his left eye to the middle of his bearded cheek. The eye twitched as his fiery anger seared my empathic perception. My stomach wrenched as it always did when struck with strong emotions, and I had slammed my mental empathic barriers into place too late. As I quashed the incipient nausea—I did not need to lose my dinner in front of everyone to add to my chagrin—the inevitable headache stomped into my brain. Closing my eyes accomplished nothing against what seemed like an explosion of fireworks in front of my optic nerves. I opened them again and squinted at the rebbe. “Is there a problem?”

“You should heed the words of a man who knows the path of true faith.” The scarred rebbe glanced at the giant who had stepped away from us, and then back at me. “I shall see more of you, I think.” He turned and stalked out of the tavern with the other two rebbes in tow.

Oh, shit. I’d really screwed up this time. What started as a disagreement over a government entitlement program had ended in my denouncement of the dogma of the Rebbinical Council and the tyrannical theocracy that ruled Dovid’s World. My big mouth could send me straight to the Inquisition.

Subdued conversation resumed with the exit of the rebbes.

A touch on my shoulder accelerated my heartbeat again.

My recent opponent stood over me, his voice now soft and serious, not mocking as it had been. “You okay? You don’t look good. Come on, I’ll buy you a drink.” He put a huge hand on my shoulder and steered me to a table in a corner.

I was in no condition to argue further.

He frowned as we sat. “You’re a fool. Your words could put you in prison. You need to use your brain before your mouth.”

Yeah, I knew that, but it never seemed to help much. Already in a lousy mood and feeling awful, I did not need someone else pointing out my flaws. Although angry at myself for my stupidity, it was easier to direct my anger at the most convenient outlet, so I glowered at the man in front of me. Goliath’s bright brown eyes studied me, in turn.

As the headache faded, I cautiously lowered and peeked over my shields, all I could do without incapacitating myself. I sensed an aura of curiosity, but not the hostility I expected considering his attack on my heretical statements.

He turned and addressed the barmaid who came to our table. “An ale for me. A cider for my friend.” He raised an eyebrow, dared me to contradict him.

I didn’t argue. Still queasy from the rebbe’s emotional assault, I knew that too much alcohol had taken its toll, though I did not appreciate the reminder.

The man thrust his bear-like forepaw across the table and smiled. Full lips peeked out from within a sandy beard and moustache, topped by a broad, crooked nose. “I’m Furoletto Cohen. People call me Fur.”

I stared at his hand and rolled the name around my brain; I did not recognize it. Fur fit his impressive facial shrubbery. I was envious. The law said that men of age must wear beards. I barely managed an anemic lawn of chestnut fuzz.

His hand engulfed mine. “Well, Cy Berger, perhaps turning your inappropriate tirade into a clownish performance might save you worse trouble. Didn’t you see the rebbes sitting in the back? We can hope that a laugh at your expense will make them less likely to take serious action.” He tugged at his beard.

“Why should you care?” After all, he had just humiliated me in front of the entire tavern—some of my fellow students included.

“Why? A good question. Wait. Here are our drinks.” He took his and downed half the mug in one swallow.

I sipped my cider and wondered what the guy’s angle was.

Cohen wiped his mouth. “I wouldn’t see anyone subjected to the Inquisition. You should learn to keep your political opinions to yourself...at least in public.” He smiled, perhaps to blunt the edge of his criticism. “Tell me about yourself. I might as well know whom I tried to save.”

Mortification compounded by annoyance made me curt. “I’m a student at the Academy College of Veterinary Medicine.”

“Congratulations. Not an easy profession to get into. What about before that?”

Though the compliment sounded sincere, I was still leery of the guy. Why this change in attitude toward me? What did he want? “I grew up on my family’s dairy farm, throwing bales of hay and shoveling kilotons of shit. What’s it to you?”

He smiled despite my hostility. “What do you do for recreation? Besides drink.”

“All right. What is this? Your version of the Inquisition? Why don’t you just kish mein tuches?” Even as the words poured out, I regretted them.

His brows pulled together, his eyes narrowed, and he slammed his mug onto the table. My cider glass jumped and teetered before I caught it. My hands shook and slopped cider on the tabletop.

He took a deep breath before he spoke. “Look, Berger, I tried to help you tonight. Maybe that was a stupid thing to do, considering you don’t seem to give a shit. I thought perhaps you could learn from a bit of advice, but that looks to be a lost cause. Fine. I’m finished. Maybe I’ll see you again when the Rebbinical Council gets done with you—if there’s anything left to see.”

God, I could probably piss off that ancient icon of forbearance Mahatma Gandhi, if I had the chance. Cohen’s words hit too close to home. My breath caught as I recalled horror stories about the Inquisition. As he started to rise, I grabbed his arm. “Wait. Don’t go.” At least his presence made me feel like less of an isolated target. “I know you tried to help me. It’s just...how you did it.”

He sat down, though his frown did not clear until I began to talk.

To be truthful, it never took much to get me started. Shutting me up was a bigger problem. I watched my fingers make wet circles of cider on the tabletop as I spoke about myself. “...so, aside from my studies, I read a lot, and I have a thing for watching ancient vids from Old Earth.”

“I read and watch anything available on microchip from the ancient Greeks to the present. History, philosophy, fiction. Recent books I’ve read have been on political systems, particularly religious tyrannies.” I glanced around to see if the rebbes hovered behind me. Many of the tables had emptied. “Don’t get me wrong. I don’t reject Judaism. I treasure our traditions. But I do have a problem with dictatorships and oppression.”

“I would never have guessed.” Fur’s mouth curled up at the corners. “Veterinary medicine makes sense with your background, I suppose. I don’t think politics would suit you.”

Despite our disagreement, I liked the big man, but I still was unsure about his motives. “Hey. I’ve given you my life story. What about yours?”

“Perhaps another time.” He scowled at me. “Until then, you might keep your mouth hidden behind your textbooks.”

We shook hands, or rather, I let my hand disappear within his and move up and down without my assistance. He threw a bill on the table and trudged off.

As I stared at the iconic picture of a rebbe adorning the bill, a frisson ran up my back. I finished my cider and I left the tavern. As I stepped out the door, I came face-to-face with two members of the Palmach, the government’s elite police force. Their stealth-powered armor disappeared into the darkness, and it seemed as if their faces and hands floated disembodied before me. One flipped his visor down and then back up, as if to ensure himself of my identity before he spoke. “Mr. Berger, you are to come with us.”

My first thought was to bolt, but for once my brain recognized the stupidity and futility of such an action. I felt like I had a mouth full of chalk dust, and it took a couple of tries to get any words out. “Wha-what for?”

“You will be informed.” He motioned with a laser rifle for me to move.

The other guardsman took hold of my arm in a painful grasp, and they marched me off as our smaller moon joined the larger moon above the rooftops. I wondered if I’d ever see such a sight again.